The Dangerous Construction of National; Religious and Moral Identities in the Ukrainian War 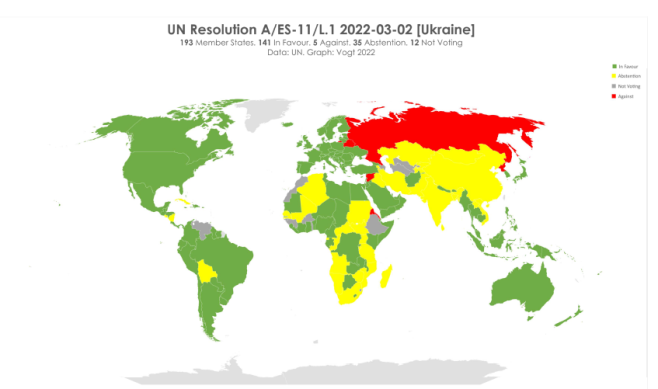 The Russian invasion of Ukraine violates fundamental norms of international law and is at the same time an attack on the order of values of liberal democratic societies. The long prepared, ideologically based aggression was massive underestimated. In the foreground of the war are not rationally comprehensible interests, but identity-related conflicts of recognition with their very own grammar of uncompromisingness and power dynamics. For Russia, Ukraine and Europe, the scholarly reappraisal of the highly divergent identity constructions is of central importance. The theological critique of a nationalist-identitarian-political use of the Christian faith is an important peace service that the churches have to perform.

World map showing the UN vote on Ukraine: large parts of the world voted with green, but by no means all
(Source: Matthias Theodor Vogt)

It remains to be seen how India, which is dependent on Russian arms supplies, will behave, and how China will act, which, in view of its own genocidal human rights violations against the Tibetans, the population of Inner Mongolia and the Uyghurs, shies away from condemning Russia and which could massively weaken the effect of the sanctions through financial and economic cooperation with Russia. President Putin has too often experienced that economic interests have made many players overlook his actions, which are contrary to international law. This was the case with the annexation of Crimea and the covert low-intensity war in the Donbass, as well as with his support for criminal dictators like Assad in Syria or Lukashenko in Belarus. Freezing Russian accounts in Swiss banks was an important step. But Russia’s exclusion from the SWIFT payment system has so far been only half-hearted. Europe must accelerate the energy turnaround and reexamine the tensions between energy security, climate protection and social compatibility in order to quickly become independent of Russian gas.
European societies are making their solidarity clear through a high level of neighborly assistance. The willingness to provide humanitarian aid to Ukraine and to openly welcome the growing influx of migrants - especially in Poland - is overwhelming. However, in the light of the immeasurable suffering and military atrocities in Ukraine, this is cold comfort. It is a bad sign that, after its voluntary renunciation of nuclear weapons in the Budapest Memorandum (1994), Ukraine must experience now being so helplessly at the mercy of violence and not receiving sufficient protection from the international community. It would have required, for example, precautionary action on the part of Germany to supply defensive weapons and food depots for the large cities that are now being surrounded, as well as assistance with military training.
The challenge of these days makes clear that it is not just a matter of taming the flagrant war and ending the suffering and death in Ukraine. Rather, it is a beacon of current upheavals that demand intense ethical reflection. We live in a time of multiple crises and accelerated change in a multipolar world that is increasingly characterized by a highly complex "evolution of violence " (Münkler, 2017). In the process, familiar patterns of order in politics, the economy and society are losing their validity, without the future order already being discernible. In response to the resulting uncertainty, the striving for security and resistance to crises on the part of individuals and societies is becoming a central ethical and political goal. At the same time, global society cannot remain indifferent to changes in the international order. Not every change is to be tolerated. Such behavior would be a misunderstanding of tolerance. What is necessary is to observe tolerance in its three basic dimensions (Vogt and Husmann, 2021) in all changes: Passive tolerance as a fundamental renunciation of violence and the effort to resolve conflicts primarily by means of diplomacy. Active tolerance as the defense of human rights and freedoms, which can also mean providing military support, because democracy must be strongly defended. Proactive tolerance aims to save spaces of dialogue and trust between peoples. It wants to expand exchanges and mutual understanding between civil societies and, last but not least, religious communities.
Since the Ukraine conflict is part of a multi-layered struggle for a new world order, it cannot be resolved in the long run without the creation of an international peace and security order appropriate to today's challenges and lines of conflict. The reform of the Security Council, which no longer adequately reflects the balance of power in the world and is misused or blocked by the powerful as an instrument of unilateral dominance policy by means of their veto power, is of primary importance here. The partial withdrawal of the U.S. as a world power has created a vacuum that must be compensated for by a consolidation of the manifold supranational linkages (Schockenhoff, 2018, 639-665). This could also include a European Security Council to increase the EU’s ability to act. The various institutions involved in security policy (including the UN, NATO, OSCE, and the EU) must be coordinated in a complementary manner.
Lasting peace requires forgiveness and reconciliation, including with one's own history. The historical dimension of today's conflicts is made clear by the fact that narratives that clash with history have been used to construct a rationale for war. It is clear from these narratives that the Russian president and a probably significant part of the Russian population lack reconciliation with the disintegration of the USSR (Rocca 2022). The sense of grievance from perceived degradation and non-recognition as a world power is the driving force behind the current aggression. Given the disastrous consequences of the Ukraine war for everyone, including Russia, which is harming itself more than anyone else could have done, the grievance is initially intensified. Overcoming it will certainly take a long time. Here the Churches and religious communities have an original task, since reconciliation always has a religious dimension (Vogt, 2021a). At the same time, it is also highly relevant socially and politically.
The conflict between Russia and Ukraine is ultimately about reconciliation between the different values, cultural mentalities and political models on the borders of Europe. However, where regimes systematically deny truth, freedom and humanity, they have no moral legitimacy. For Russia, Ukraine, and Europe, the scholarly reappraisal of the highly divergent identity constructions and the role played by religions in them is of central importance (Golczewski, 2018). Rationally comprehensible interests are not in the foreground, but conflicts of recognition with their very own grammar of uncompromisingness and power dynamics. The theological critique of a nationalistic claim on the Christian faith is an important peace service that the churches should perform (Vogt 2022; Fetko 2022). Being a Christian in the face of a world order that has become fragile requires a considerably higher degree of commitment to the values of peace, freedom and reconciliation than we have been accustomed to in the security-addled German world of the past decades.