Aristotle’s Μετεωρολογικά: Meteorology then and now 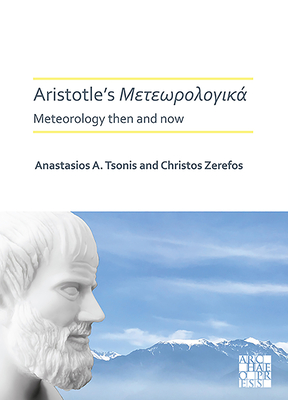 This most recent English commented translation of Aristotle’s Metereologica focuses on how Aristotle’s treatise compares with our understanding of meteorology and climate change. In their extensive commentaries, the editors explain how Aristotle tried to explain weather 2.300 years ago, having at his disposal only logic, eye observation, past experience, and primitive instrumentation. The book uses telling examples and can be easily followed by general readers.

In the Metereologica Aristotle not only critically rethinks the cosmological ideas and principles that had been developed in Greece since the beginning of rational reflection on physics, but also formulates a way of seeing the cosmos so original and organic that has become the cosmological paradigm of the West for more than a millennium. The Metereologica consists of four books (although the fourth book, which is dedicated to processes of generation and corruption, is generally believed to be apocryphal) that deal with what was then known on atmosphere, geology, geography, hydrology on the Earth conceived as spherical. Each of these themes is articulated by Aristotle in a peremptory and well-argued manner, which sparked a tradition of discussing the individual history of problems, whose impact has been extending to the present. The two editors-in-chief, Anastasios A. Tsonis and Christos Zerefos, both environmental scientists, have already published an extensive series of papers to meteorology. Their new English-language commented translation is based on Immanuel Bekker’s reference edition of Metereologica, published in 1831, vol. 1, 268a-313b.

The term meteorology derives from the Ancient Greek word μετέωρος metéōros (meteor) which means “a thing suspended high in the air.” Aristotle’s treatise Μετεωρολογικά (Meteorologica; on Meteorology) holds a special place within the body of his opera omnia, for it is the only treaty (πραγματεία) that deals with such diverse domains as astronomy, geometry, optics, geography, seismology, volcanology, chemistry and weather forecasting—the subject matter of today’s meteorology.

This edition is an endeavor pursued by two non-philosophers: Anastasios Tsonis, an expert on chaos theory, climate dynamics and networks, and Christos Zerefos, who is currently a State Representative for Climate Change for Greece and the coordinator of the Climate Change Impacts Study Committee of the Bank of Greece.

In preparation for their work, the editors have looked at the most recent English (Lee 1952; Barnes 1984) and Demotic Greek (Nikoloudis 1994) translations, keeping in mind their familiarity and knowledge of Ancient and Demotic Greek, and meteorology. It is important to note that due to their scientific backgrounds and interests, the editors have decided to refrain from presenting an integral version of the Aristotelian treatise. They have translated and commented only on the parts that are relevant to meteorological phenomena—for example, they do not deal with Aristotle’s views on the stars or earthquakes. Most importantly, they have compared Aristotle’s arguments with today’s current knowledge of meteorology to bring out the deduction process that allowed Aristotle to make inferences about scientific ideas based on a few fundamental assumptions, non-instrumental observations, and logic.

Book A starts by considering the five fundamental elements: ether, fire, air, water, and earth, and their distribution in the universe. Aristotle introduces the basic notion of exhalation (αναθυμίαση), which causes water and land to exhale vapor and dry air, respectively, after they are warmed by the Sun. The Earth is heated by solar radiation, and the air in contact with it warms up and rises. Moist air is a mixture of dry air and water vapor. The air cannot hold any amount of water vapor. The maximum amount of vapor the air can hold depends on the temperature of the air. The higher the temperature, the more the water vapors, the more the air can hold. Thus, warmer air can hold more water vapor than colder air (Frede 2004).

Aristotle then discusses this rising motion and how it produces dew, frost, rain, snow, and hail. After that, his attention moves to issues not directly related to weather, such as stars, comets, the galaxy, etc. Here we see that many of the features that Aristotle discusses in Meteorologica cannot be considered suspended in the air—think of rivers and seas. They are included, though, for their relation to moist and cold exhalation. Similarly, shooting stars, comets, and the Milky Way have nothing to do with weather and meteorology. They are nonetheless part of his discussion because they were thought of as suspended and products of the exhalation from the Earth. Aristotle discusses the phenomena of aurora borealis together with other optical phenomena such as rainbows. Ioannis Liritzis has reconstructed Aristotle’s and Anaxagoras recording the aurora of 467 BC through archaeomagnetic inclination and virtual geomagnetic pole position (Liritzis 1988, 2003, 2017). Aristotle considers that the rainbow contains three colors: red, green, and violet (purple). He sometimes also mentions yellow (or orange), but this color is not to be considered in the same class as the three mentioned above; it is due only to contrast. Red, green, and violet are the primary, basic colors: they are real colors. This tradition of considering only three colors as basic and real continued for a long time and remained unchallenged in the Aristotelian form until the beginning of the 14th century (Sayili 1939). Aristotle’s arguments to justify those three colors can be classified as a) mystical or philosophical; b) arithmetical; c) experimental. Finally, in Book A, Aristotle also briefly talks about winds. This topic forms a significant part of Book B with the detailed elaboration on wind formation and wind distribution on Earth. It is important to note that at the end of Book A, Aristotle touches on what today we would call global climate change, a topic of great interest and debate nowadays.

In Book B, Aristotle continues with the formation of lightning and thunder and subsequently touches on earthquakes, a topic again unrelated to meteorology. In Book C, Aristotle discusses optical phenomena such as rainbow and halo, and he explains their formation with the help of geometry. In this book, Aristotle also ventures into the creation of metals, also unrelated to meteorology. In Book D, Aristotle classifies warm and cold as the two active causes and dry and moist as the two passive causes and discusses how the active affect the passive and how their interaction affects our senses. Book D is hardly related to meteorology; however, hidden in this discussion is the notion of (thermodynamic) equilibrium, which is essential in weather processes.

In A Brief History of Time, British physicist Stephen Hawking (1988) notes that this Aristotelian treatise was one of the milestones from which humanity has started understanding nature within the limits of possible closeness to reality. True enough, observe the editors, Aristotle came short in correctly explaining some fundamental phenomena. For example, his focusing on dry and moist exhalation and his unawareness of atmospheric pressure prohibited him from accurately explaining the genesis of winds and phenomena associated with thunderstorms, such as thunder and lightning. Also, the fundamental fact that the Earth rotates on its axis and revolves around the Sun is absent from the Aristotelian model. They believe that if Aristotle had been able to grasp those two facts, the world would be very different today. However, they suggest we have to admit that many important explanations or descriptions of Aristotle have stood the test of time. The realization that warm air is lighter than cold air and that warm air rises and cold air sinks, his description of convection, the fact that when the air is cooled, water vapor condenses to produce clouds and rain, his paramount description of the hydrologic cycle, his insights on the formation of dew, frost, and precipitation (rain, snow, and hail), his discussion on global climate change, his arguments on the expected variability in space and in time of rainfall and droughts, the fact that most winds are north and south, the notion of rotation causing the direction of the wind to be oblique, the discussion on habitable regions, and the extraordinary prediction of the existence of Antarctica, stand the test of time forever. The description of the Etesian winds and the insights on atmospheric circulation and atmospheric cells, such as the Hadley cell for the trade winds, whose discovery was published in 1735, i.e., twenty-two centuries after him, is astonishing. Aristotle’s understanding of water distillation, his introduction of the notion of salinity, and his grasping of how different densities of different waters imply differences in buoyancy between rivers and oceans all these items confirm the profile of a great thinker and a unique observer of nature.